Nine out of Ten Forklift Users CAN be wrong 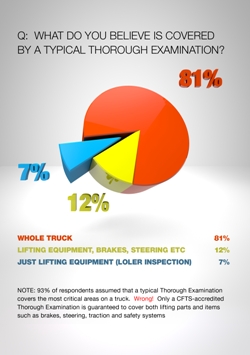 A survey among companies owning and operating fork lift trucks has found that most Thorough Examinations do not meet user expectations. Indeed, a clear majority are confused by what exactly is included… and who is responsible for making sure a truck conforms to legal requirements.

The survey – conducted by Consolidated Fork Truck Services – involved telephone interviews with truck users throughout the UK extending across a broad cross-section of industrial classifications and fleet sizes in order to ensure a representative sample.

On the positive side the research confirmed that a concerted campaign has had a dramatic impact on awareness of Thorough Examination. When asked, in a previous (2005) survey, whether Thorough Examination was a legal requirement or merely “good practice”, around half (54%) answered correctly. Today, that number has risen to an impressive 76%.

Unfortunately, behind that headline figure there remains considerable confusion regarding what is actually included within a Thorough Examination. As a result, many tens of thousands of managers and directors may be responsible for equipment that simply isn’t being examined as thoroughly as they had anticipated…

Most strikingly, the vast majority of respondents – 93% – incorrectly assumed that any Thorough Examination would automatically include an inspection of their truck’s brakes as a matter of course.

According to Simon Emery, Chairman of CFTS, the body which commissioned the research, “The confusion arises because, unlike the MOT on a car, the requirements of a Thorough Examination are open to interpretation. In effect, the body providing the inspection is able to decide what should and shouldn’t be included. The nub of the problem is that the inspection of fork lift trucks is governed by two separate pieces of legislation: Provision and Use of Work Equipment Regulations 1998 (PUWER 98) andLifting Operations and Lifting Equipment Regulations 1998 (LOLER 98). However, an alarming number of inspectors only include those items covered by LOLER – such as mast, chains and forks – within their inspection. In doing so they totally ignore crucial areas such as overhead guards, steering, brakes and other vital components… As a result, managers and directors responsible for fork lift trucks may fall foul of PUWER 98 legislation on ensuring the suitability of workplace equipment.”

It was to overcome this clearly untenable situation that the two leading organisations in the fork lift truck industry – the British Industrial Truck Association (BITA) and the Fork Lift Truck Association (FLTA), with the support of the HSE – joined forces to create a single, national procedure available to truck users, wherever their industry or location.

The result is a comprehensive procedure and strict code of practice, a programme of engineer and management training and the mechanism to monitor standards under the CFTS brand name. Companies accredited to the scheme – and there are around 400 of them covering the length and breadth of the UK – can be identified via the distinctive “kite” certification mark.

“Customers need to be aware that all Thorough Examinations are not the same. Some are more thorough than others. My advice to those responsible for the upkeep of fork lift trucks should seek clarification on exactly what is being inspected – or they will get less than they bargained for….

They can do that by taking advantage of an interactive online tool that clearly identifies which parts of a fork lift truck are covered by LOLER, and which by PUWER using our interactive guides."